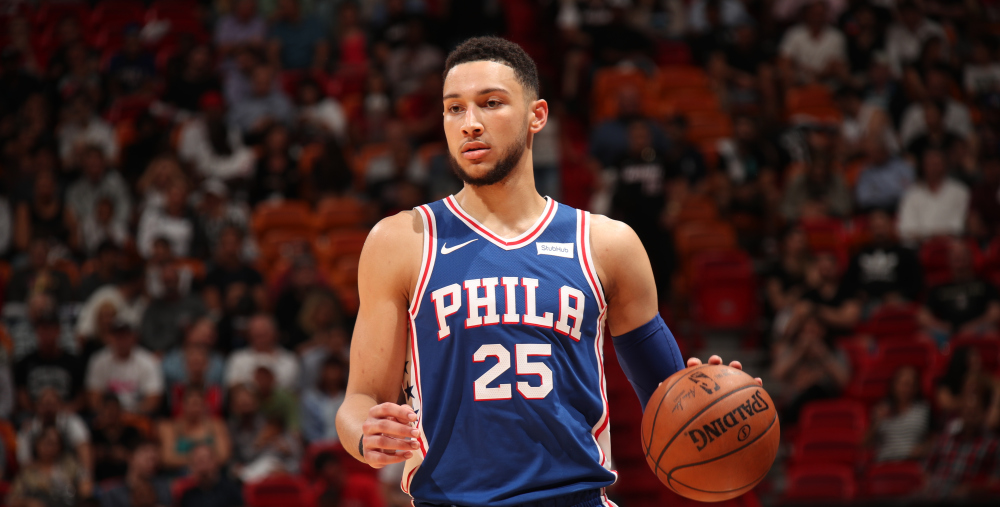 In an era where everyone shoots three-pointers, Philadelphia 76ers All Star, Ben Simmons ain’t in that conversation.

An athletic 6’10 point guard, Simmons executes the daunting task of balancing otherworldly playmaking skills while also defending some of the best swingmen in the NBA’s Eastern Conference.
“Jump-shot shaming” Simmons has been ‘a thing mainly, well because Simmons’ mid-range jumper and his three-point shooting weren’t his friend last season.

In Game 2 of the Sixers’ playoff series against the Boston Celtics, the Aussie guard finished with just one point and was reluctant to shoot the ball as the Celtics defence zeroed in on him.

The NBA’s reigning Rookie of the Year, Simmons, 22, earned that distinction without being any legitimate threat of knocking down an outside shot.

That begs the question: does he even need one?

NBA Hall of Famer, Jason Kidd was once called ‘Ason Kidd, because he lacked a respectable jumper. He still guided the then-New Jersey Nets to two NBA Finals visits and deep playoff runs and later won a ring with the Dallas Mavericks before transitioning into coaching.

Kidd’s son, T.J. Kidd told me last month that he sees similarities in both Jason Kidd and Ben Simmons’ game. “I do, for sure,” he said.

“The game has changed so much, I think Ben Simmons is great and I think shooting 3’s doesn’t have to be his game and once he gets an outside shot, I think he’ll be okay. I do see the similarities and why people have a problem with the jump shot. But they’re already great players. Adding a weapon like that adds to what they have to bring to the table, which is already so many great things.”

Retired NBA player, Mikki Moore lived his best life in the NBA as a member of the Nets during the 2006-07 NBA season playing alongside Jason Kidd. Moore averaged a career-best, 9.8 points per game and 5.1 rebounds per game in his lone season with Nets.

Playing with Kidd was a breeze for him. “What I would do was: I would box out my man, let him get the rebound, and he’d take off,” Moore told me.

“It’s that simple: if you do that much, you can easily average a double-figure game.”

Moore led the league in field goal percentage that year, shooting 60.9%. With that quality shooting percentage and playing with a quality point guard in Jason Kidd, Moore has both authority to quantify whether Simmons need a jumper to be effective for the Sixers. “I think that he needs to be more of a floor general than working on that jumper right now,” he told me.

“As long as he can control the tempo of the game and help the other four that’s out there with him, that jumper is going to come, you know?”

So what’s the problem then?

“I think he’s just thinking about it too much,” said Moore.

Simmons told HoopsHype Alex Kennedy that his jumper is not his focus. “[Shooting threes] isn’t my main goal at all,” he said.

“I mean, I’m not even where I want to be when it comes to finishing at the rim or my post finishes. I’m still getting better at that. Once I’m good at that, then I’ll probably expand my game.”

Simmons does have other threats on his team: Joel Embiid and Markelle Fultz to name a few.

So in the case of Ben Simmons, what must be done to get the stress off of him and the quality that he seeks. “If they sag off of him, take your shots,” says Mikki Moore.

“You’ll be able to take your shots, because if you can make up the misses with fast-breaking and good defense, it doesn’t matter if you miss.  And then, that stress and you worrying about you not making a shot, that’ll go away.”

Moore’s sentiment links similarly to what Simmons told 97.5 The Fanatic’s Brian Seltzer this summer: “If you take [jump shots], [teams] give you a little bit more respect,” he said.

“And you’re able to make more moves and dissect the defense,” Simmons said. “This summer, I’ve been working a lot on certain things that I’ll definitely use.”