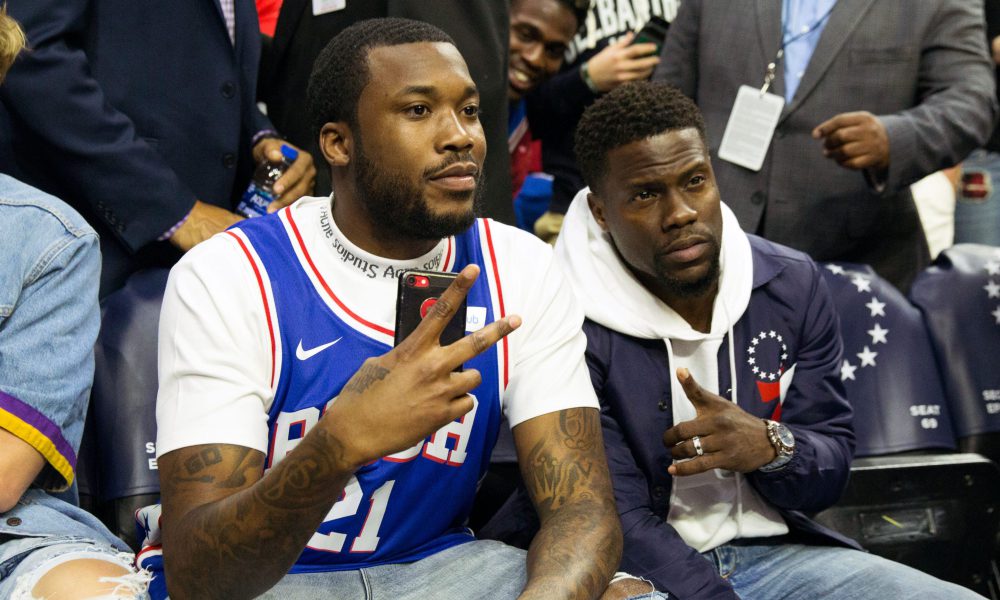 On April 24, 2018, Meek Mill was freed from a Chester, PA jail, pending the outcome of his appeal to the Pennsylvania supreme court.

Hours after his release, Meek Mill flew from Chester, PA to the Wells Fargo Center in South South Philadelphia to watch game 5 of the Philadelphia 76ers and Miami Heat’s Eastern Conference Round 1 matchup.

Mill was able to speak with media, shower, get a haircut and commence the pre-game ritual of ringing the Liberty Bell.

Mill sat courtside with Philadelphia native and comedian, Kevin Hart and watched the Sixers beat the Miami Heat and advance to Round 2.

None of this would have been possible without civil rights activist and MSNBC host, Rev. Al Sharpton, according to Meek Mills’ lawyer, Joseph Tacopina.

“Meek Mill went from the courthouse, to the helicopter, to a 76ers NBA Playoffs game, thanks to the leadership of Rev. Al Sharpton,” said Tacopina after being awarded with the President’s Award for Service and Humanitarian Effort by Rev. Sharpton’s National Action Network.

“Meek Mill was an individual being trampled on by the Philadelphia justice system.”

Added Tacopina: “Meek Mill became a voice for the voiceless.”

Reverend Sharpton visited the rapper in prison, participated in rallies and panel discussions calling for Meek’s release as well as an overhaul of the U.S. criminal justice system.https://platform.twitter.com/embed/Tweet.html?dnt=false&embedId=twitter-widget-2&features=eyJ0ZndfZXhwZXJpbWVudHNfY29va2llX2V4cGlyYXRpb24iOnsiYnVja2V0IjoxMjA5NjAwLCJ2ZXJzaW9uIjpudWxsfSwidGZ3X2hvcml6b25fdHdlZXRfZW1iZWRfOTU1NSI6eyJidWNrZXQiOiJodGUiLCJ2ZXJzaW9uIjpudWxsfX0%3D&frame=false&hideCard=false&hideThread=false&id=1049823027096154112&lang=en&origin=http%3A%2F%2Fscoopb.com%2Fmeek-mill-sixers-al-sharpton%2F&sessionId=4805fe0d511f8644f9d05018d54b904d008b0cb5&theme=light&widgetsVersion=82e1070%3A1619632193066&width=550px

In his letter to the court last November, Reverend Sharpton requested that the judge in the case be removed.

“I write to you as someone with deep respect for the Judicial Process and as a true believer in fairness and equality in criminal justice matters,” Reverend Sharpton wrote to the Philadelphia County court.

“You may have read of my recent involvement with the case matters of Robert Rihmeek Williams (professional known as “Meek Mill”).  He is currently serving a probation violation and was sentenced to a term of incarceration, over the objection of both the local prosecutor and the assigned probation officer, by Judge Genece Brinkley.  You may also be aware that I have publicly called for Judge Genece to be removed from Mr. Williams’ matter.”

Ironically, while Reverend Al aided in the process of getting Meek Mill freed, the ordained minister told me that he was candid about Mills’ lyrical content.

“I told him I wasn’t a fan,” Reverend Sharpton told me on Scoop B Radio.

Reverend Sharpton also said of Meek Mill: “I learned that he was a smart guy, he was sincere and he really was committed to more than himself.”

“He kept saying, ‘Reverend Al, I appreciate you coming to fight for me, but also this fight for a lot of people that are mere minor infractions are in jail.’ I was very moved by that.”

PrevPreviousLAKERS’ LEBRON JAMES TO BE GIVEN A FASHION ICON AWARD AT PRE-NY FASHION WEEK EVENT ON TUESDAY
NextSIXERS’ BEN SIMMONS SHOULDN’T CARE ABOUT HIS JUMPER & FOCUS ON BEING A “FLOOR GENERAL,” SAYS RETIRED NBA PLAYERNext