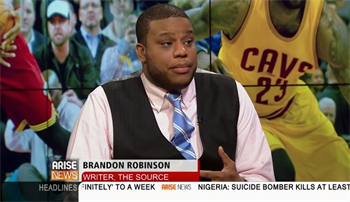 SCOOP B: WHAT I LEARNED DURING MY TIME AT THE SOURCE MAGAZINE

I get asked a lot by folks young and old, about my life experiences in journalism. Having gotten an early start as a kid, hosting a radio program for two seasons, called Nets Slammin’ Planet with Lynn Wilson, Albert King and Evan Roberts. It was an awesome opportunity and I cherish it because it laid the foundation. However, I’d never really written about those experiences in depth. This blog will serve as that buffer.

That said, I will go counterclockwise and begin with my first big-time adult work experience: a staff writer at The Source Magazine.

Just like SLAM Magazine, Sports Illustrated, VIBE and ESPN The Magazine, The Source Magazine was a staple in my bedroom at my parents home and even during homeroom period during my high school days at Don Bosco Prep.

To have the opportunity to write at The Source Magazine was pretty cool and nostalgic. But I never got comfortable. I didn’t just want to be good. I wanted to be great!

Most young folks fresh out of college hope to sink their teeth into something local and build their way up to the big leagues. My time at The Source Magazine gave me local, national and international experience from the Fall of 2013 until my departure from the magazine in the Spring of 2015.

I find that the stereotype for many 20-somethings and early 30-somethings is that we’re lazy and looking for a handout. While I got the opportunity to write at The Source, I created my own leads and many opportunities. What I learned during that time was: work within a team structure, while also being a self-starter. My time at The Source, I also got to write about more than just sports: I zeroed in on lifestyle too. I like sneakers, suits, bow-ties, video games, food. But I also met and interviewed folks outside of just sports like Rihanna, DJ Khaled, Jay-Z, Puff Daddy, Lauryn Hill, Ashley Graham, DJ Envy, Play from Kid ‘n Play and many more.

I present to you: 3 Takeaways From My Time With The 5 Mics:

1. It Doesn’t Hurt To Ask When You Need Help. While I was at The Source, they would not pay for my travel to work as press during the 2014 NBA All Star Game in New Orleans. That didn’t stop me. Through GoFundMe.com and the help of family and friends, I crowdfunded $2,360 in 9 days to fly myself and a photographer to the big game in the Big Easy. I had enough money to pay for hotel and food as well. I chatted more about the NBA All Star Weekend Crowdfunding experience with Charmaine Nero check it out here.

2. Write As Much As You Talk If Your Dream Is To Be On Television. Many people say to me, ‘Man when will you get on ESPN so you can debate Stephen A. Smith?’ That’s actually not a goal of mine. I hate all of that yelling about folks who make more money than me and aren’t thinking about me! Side note: I respect Stephen A’s, gifting and his longevity to his career and wish him continued success. (I’ve had him on my Scoop B Radio Podcast. Give it a listen when you get a minute will ya?!) However, even before Stephen A. Smith got into television, he had to put in constant reps as a writer: The New York Daily News, The Philadelphia Inquirer and ESPN.com, to be exact. He even broke stories on his own website when he was a free agent.

Remember the LeBron James and Chris Bosh free agency sweepstakes in 2010? Yeah, he was breaking news on his website. Ironically, he was ahead of the curve in terms of the entrepreneurial journalism. Now in the 2017 click bait landscape, if it sounds true and it’s re-tweeted enough times, it’s news! During my time at The Source Magazine, I used some of his strategies that I observed as my muse.

My goal when I got there was simple: establish a voice through my writing so that I’d be sought out on camera. I’m not bad looking either, so my mom says so anyway! My method worked.I became a regular sports contributor to Arise TV Network.
https://www.youtube.com/embed/iQc-yLeLgmk

I even gave some guest sports expert commentary on CTV in Canada and PIX 11 here in New York City.

3. Seize The Moment and Walk In Your Calling. My biggest moment during my Source Magazine tenure was getting a question in with NBA Commissioner, Adam Silver during his press conference when he banned former Los Angeles Clippers owner Donald Sterling.https://www.youtube.com/embed/D3MOOEmBkrU

While there, folks thought I was comedian Kenan Thompson. My phone blew up, my family was proud and I was recognized amongst my peers both younger and older. I went home, enjoyed it for a few hours and then got back to work! I never got comfortable. To paraphrase lyricist Lloyd Banks album, ‘I had the hunger for more.’ Plus I didn’t arrive then and I still haven’t now.

PrevPreviousCHECK OUT MY DISCUSSION ON JOURNALISM & BRANDING IN BLACK ENTERPRISE MAGAZINE
NextCLINT CAPELA IS NOT A MAX PLAYER & GETS A LOT OF POINTS “BECAUSE OF JAMES HARDEN,” SAYS ROBERT HORRYNext