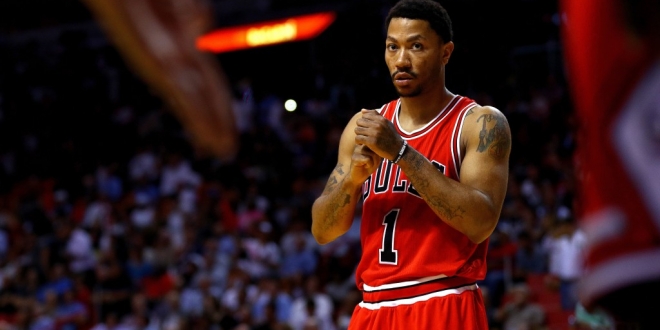 Also this summer, the Timberwolves signed Derrick Rose to a one-year, $2.3 million deal.

The former Chicago Bull, came off a pretty impressive NBA playoffs for Minnesota last season where he posted 14 points.

That’s encouraging for a player who was probably the best thing that happened to the city of Chicago since Michael Jordan retired.

The youngest player to win the NBA’s MVP award back in 2011, Rose was part of a few Bulls playoff runs and the South side Chicago native was the king of his castle.

Unfortunately, multiple ACL and MCL injuries changed the trajectory of Rose’s career and has had many NBA purists wondering: “what if.

MINNEAPOLIS – MAY 3: Kevin Garnett #21 of the Minnesota Timberwolves receives the NBA MVP award on May 3, 2004 at the Target Center in Minneapolis, Minnesota. NOTE TO USER: User expressly acknowledges and agrees that, by downloading and or using this photograph, User is consenting to the terms and conditions of the Getty Images License Agreement. (Photo by Jesse D. Garrabrant/NBAE via Getty Images)

With a steady homebase in Minnesota, one could beg the question: could Derrick Rose be the Timberwoles’ starting point guard this season?

Garnett has instant clout with the T-Wolves, they drafted the man! He’s also an NBA Champion, 15-time NBA All-Star, 2004 league MVP and 14-time All Star.

Hear the man out!  “It’s D-Rose,” he said.“You know, you get older, but the knowledge don’t go anywhere. He’s more crafty now than ever in the pick-and-roll.  He’s able to get shots for guys and he’s able to knock shots down, so yeah, I would.”

Rose, 29 has gotten support from his NBA peers. Earlier this summer, NBA free agent, Jamal Crawford spoke glowingly of Rose. Crawford still recognizes Rose as one of the game’s elite guards even to this day. “His athleticism is still there,” Crawford told me on the Scoop B Radio Podcast.

“He’s still as fast as any guard out there. He would have some practices where he’d just dominate and get to the lane at will, hit shots, hit mid-range shots and floaters, all the reasons people love him. And he can do all those things. He would just run back so nonchalant, like I could do this whenever I want. He didn’t say that, but his play was so easy for him, so I think that’s something he’s going to show more this year and people will be pleasantly surprised.”

KG is rocking with D-Rose too! “I would definitely say he’s one of the top guards,” said Garnett.

Rose shot 50.9% from the field and 70% from downtown off the bench in the Timberwolves’ five-game playoff run.

He’s durable in KG’s mind. “As you get older, the games pile up, the schedule is what it is,” he said.

“It’s very hard to stay chasing these guys. You’ve got Russell [Westbrook], the West is full of guards.”

“Everyone thinks they’re athletic, but the longevity, the consistency, and being able to stay healthy is what I worry about most and nothing else.”