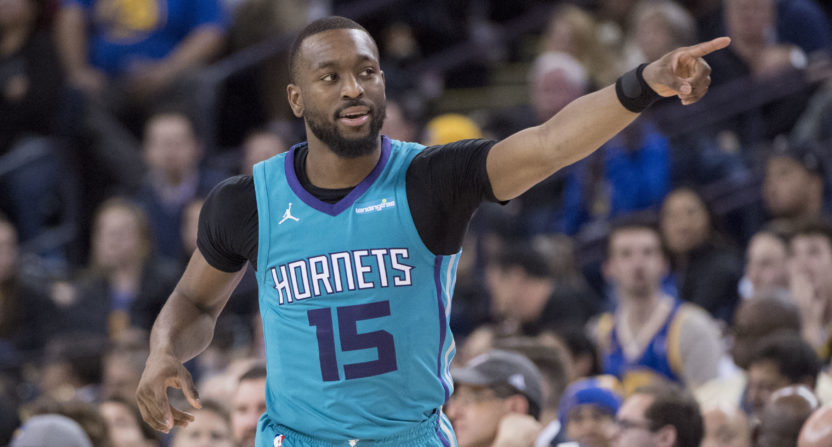 KEMBA WALKER: “I JUST WANT TO MAKE THE PLAYOFFS. THAT’S IT!”

Kemba Walker is NYC and he never was never too far from the big apple to play hoops until he was drafted by the Charlotte Hornets in 2011.

The Bronx, NY native starred at Harlem’s Rice High School and took his talents to UConn in Storrs, Connecticut where he won a National Championship.

Entering the final year of his contract, many experts are speculative of his next move and the belief is  high that the Knicks are on his radar. “I’ve been hearing it for years,” Walker told the Hartford Courant’s Dom Amore.

“Every time I come home, ‘When are you going to come home and play for the Knicks?’ I know it’s a special place, I was a Knicks fan growing up, always rooted for the home team. But I just can’t see myself in a Knicks jersey, only because I’ve only been in one jersey.”

“At first, it bothers you,” Walker said, via Amore. “Who wouldn’t it bother? Who wants to hear his name in trade rumors? But I’m seven years in—it’s not the first time. It’s something I’ve gotten over. What can I do?”

The internet went buzzing with Walker’s statement. Is the New York pipedream over?

“I’ve only been on one team,” Walker told me.

“I don’t know.  I’ve been on one team in seven years, going on eight years. So when it’s my time, I’ll make a decision.  That’s all I said. I said: ‘I didn’t see myself in a Knicks jersey because I’ve only been in one jersey, you know what I mean?”

The two-time All-Star will be a hot commodity when he hits the open market next summer. With career averages of 18.9 points per game and 5.4 assist, Walker is not chopped liver.

Below is a Q & A of what Walker has been doing to potentially post a third straight 20 points per game average.

Brandon ‘Scoop B’ Robinson:  The East is wide open.  Why do you think people aren’t mentioning the Hornets in the same conversation as some of the other teams like the Sixers or the Celtics?

Kemba Walker:  I mean, why should they?  We haven’t done anything in the last couple years.  I wouldn’t mention us either…but, you know, we’re not bothered by that, we’re not fazed by it.  It doesn’t really matter. At this point, no games have been played and there’s no telling what could happen over the course of an NBA season.

Brandon ‘Scoop B’ Robinson:  What are your personal goals going into the season this year?

Kemba Walker:  I just want to make the playoffs.  That’s it. I want to get back to the playoffs consistently, so next year is the first step for consistent playoff runs.

Brandon ‘Scoop B’ Robinson:  You’ve got somebody familiar to you, the Hornets hired a guy you’re familiar with, Jay Hernandez; you guys worked together during your Under Armor days. What have you guys been working on this summer?