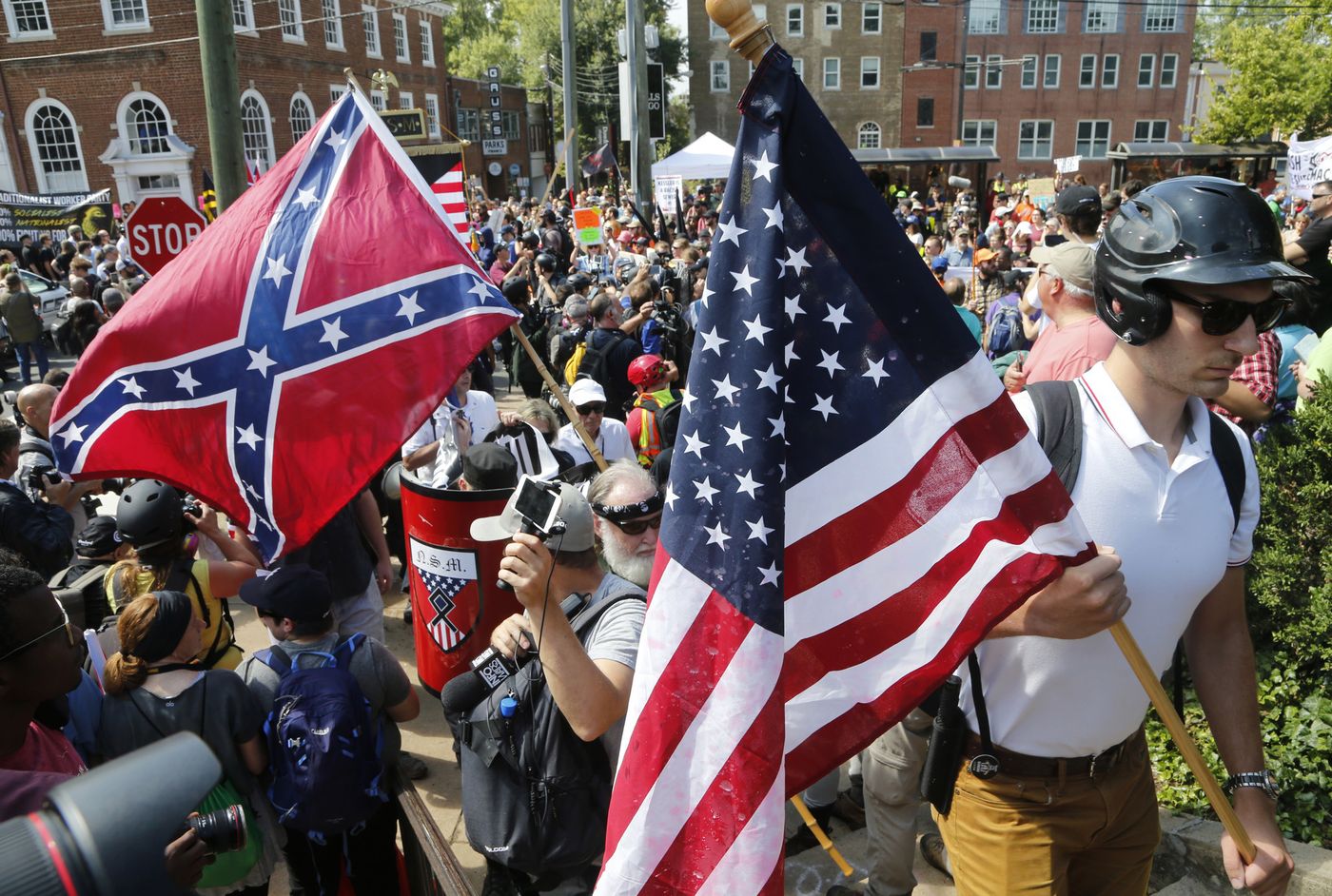 Sunday marked the one year anniversary of the white supremacist protests that occured on the University of Virginia’s campus in Charlottesville, Virginia.

Protestors described as far-right, white supremacists carried tiki torches, swastikas and semi-automatic rifles, while marching toward the statue of confederate General Robert E. Lee and chanting “White lives matter” and “Jews will not replace us!”

By the end of that day, a woman named Heather Heyer was dead after she was mowed down by a white supremacist who drove his car into a crowd of counter-protesters.

Film director, Spike Lee’s “Blackkklansman” film opened in theaters over the weekend in commemoration of the one year anniversary of the tragic events of Charlottesville.

Even before the release of the film, however, the University of Virginia football team were having conversations about the tragic events that took place on their campus in Charlottesville.

“We were on the practice field,” Baltimore Ravens rookie wide receiver, Andre Levrone told me on Scoop B Radio.

“We were literally at Scott Stadium for a scrimmage during our fall training camp.

Levrone was preparing for his senior season when the Charlottesville massacre occurred.

“We could tell, for some reason, it seems like we broke practice a little early. We could tell that Coach Mendenhall seemed a bit uneasy,” he recounted.

“Usually he doesn’t tip his hat or we can’t see what cards he’s playing, but that day something seemed wrong. So as he broke practice, he just told us that the mayor had declared a state of emergency in the city of Charlottesville, that there were riots breaking out in the streets, that unfortunately a young lady had lost her life already.”

But the Charlottesville riot of that magnitude was nothing that anybody could be in the least bit prepared for.

According to Levrone, his team stuck together, watched the news and compared notes. “We were all kinda like: ‘whoa, what in the world is going on,’” he said,

“We got back to the McCue Center, in our facility, turned on the news and see all the ruckus going on, on the streets and we were just kinda taken back like: ‘man people are really out here still in 2017 at the time, just going crazy over the difference in color of skin from two different sides.’”

In a world where kneeling before NFL games, Colin Kaepernick and the Los Angeles Lakers’ LeBron James feuding with current U.S. President, Donald Trump are daily headlines, the University of Virginia’s football team used their games as a way of unity within that community.

Finishing 6-7 and 3-5 in their ACC conference, they ended last season in a three-way tie for fourth place in the Coast Division and appeared in the Military Bowl, where they’d lose to Navy.

That momentum carried over to the Cavaliers’ men’s basketball team who in a rebuilding year and low expectations, began the season unranked and completed their season with a 31-3, ACC championship and ranked number 1 in the Associated Press’ ranking poll. “For us to have the best season we had in quite a while with our basketball team reaching the top, the pinnacle of the sports of basketball in college right now, those two things were a unifying force in our community,” said Levrone.

“It was a great opportunity for both of our teams to be able to do that this year.”

Levrone had his best statistical season in football last year. In 12 games, the wide receiver caught 34 receptions for 689 yards and 7 touchdowns. LeVrone and his receiving core of Olamide Zaccheaus and Doni Dowling made UVA history by becoming the first receiving trio to each record at least 600 receiving yards in the same season.

One of the redeeming things that Levrone believes jump started his season was his teammate, Micah Kiser, now a rookie Los Angeles Rams linebacker, suggesting that the UVA team take a team picture on the lawn, where they locked arms.

“We live in an age where symbolism can be a powerful gesture,” said Levrone.

“White, black, hispanic, different races uniting together, saying that we are family, fighting for the same thing. “We work hard, blood,sweat and tears every day together. We’re recapturing ownership of our lawn and our ground here at the University of VIrginia. I think that sent a powerful message through social media, which is something everyone uses as a way to convey messages these days.”

“I am sorry,” Ryan said this past Saturday at a UVA function chronicling the one year anniversary.

As per The Daily Progress, in the speech, Ryan called the marchers — led by UVa alumni Jason Kessler and Richard Spencer — “white supremacists,” “neo-Nazis” and “lost souls.”

Meanwhile on the football side of things, Levrone said it was a learning lesson. “Anytime something like that takes place, discussions are had,” he said.

“We were able to speak about diversity and different people’s upbringing and the things that they believe and to find some common ground, as well. Although it was a negative thing, it was some good that came out of it.”