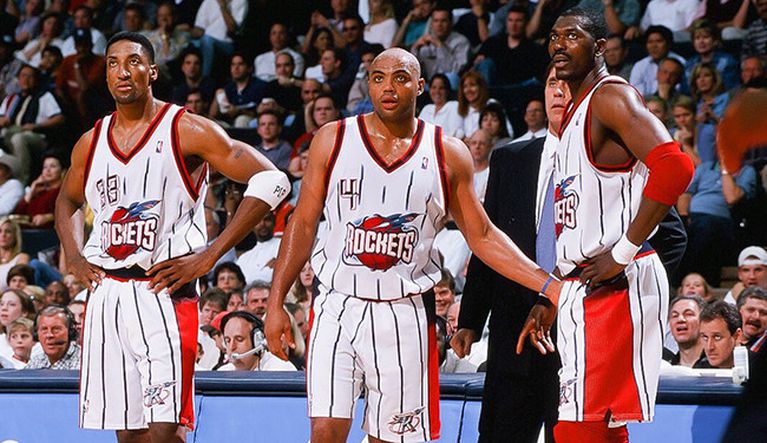 Earlier in July NBA Hall of Famer, Charles Barkley weighed in on Super Teams and stated he was against them.

“I would rather not win than be on a super team,” Barkley told Fred Ennette on the Unnecessary Roughness podcast.

“It doesn’t matter what option you are. Sports are about competition. It’s about competition. Like, I admire Patrick Ewing for trying to bring a championship to New York. I admire Reggie Miller for trying to bring a championship. I admire Michael Jordan for not leaving when they got beat by the Pistons every year. He didn’t pack up and say, ‘Let me play with Magic [Johnson] or [Larry] Bird.’”

But weren’t the Houston Rockets team that Chuck joined with Hakeem Olajuwon and Clyde Drexler, a super team?

“I would consider that a super team,” Clyde Drexler told me on the Big 3’s weekly conference call.

“You know, Charles says a lot of stuff, you know, who’s right and who’s wrong. But we’re not going to get into that. A team with three or more Hall of Famers at the same time and they still pretty much got a lot left in the tank, I would consider that a super team.”

Drexler also broke down his pure definition of super team. “I do know that super teams are not a new phenomenon,” he said.

“They’ve been happening for years. Bill Russell played with 5 Hall of Famers at the same time and that’s why he won 11 championships in 13 years. On top of being phenomenal, you’ve got 5 to 6 hall of famers that you’re playing with.”

“And then you got [Ben] McAdoo, Mychal Thompson, you’ve got Byron Scott, A.C. Green, Kurt Rambis; all these great players–Michael Cooper–same time playing very high level. That’s what super teams are all about and then.”

“I mean, that’s a super team and they’ve always been around. The super teams usually win. Because why? They’re very talented and they know how to play the game!”